Last week, I unveiled a Google Motion Chart that included a large number of advanced stats comparing point guards. This week, we’ll start at the other end: centers. I actually am including players classified as either C or PF/C by BasketballValue, where I got the position information.

Most people feel that the position of center is changing, morphing into something different than it once was.  The presence of numerous “centers” that hang around on the perimeter shooting 3’s is an indicator of this phenomenon.  Still, there is a defined way a center plays–and to define it, let’s turn to the lovely tool known as K-Means Clustering.

Tom Haberstroh had a series at Hardwood Paroxysm discussing the positional revolution. I commented at the time that a K-Means clustering analysis may be the way to attack the problem of what “positions” there really are in the NBA. Of course, the positional spectrum is really a continuum, but since there are 5 players on the floor, perhaps the 5 most common “roles” could be discerned.

Well, thanks to Dr. Wagner Kamakura at Duke, there is a free K-Means clustering plugin for Excel. I compiled 4 years’ worth of Hoopdata statistics (the shot location data is critical for this analysis) and set to work. I’m not exactly sure what I found. I explored all sorts of clustering options–5, 6, 7, 9, 10 clusters; weighted clusters; different statistics.

Here is a taste of the results, a table of a 5 cluster run, showing the archetype of each cluster. The column “Wt” at the left shows what weight I put on that specific statistic. 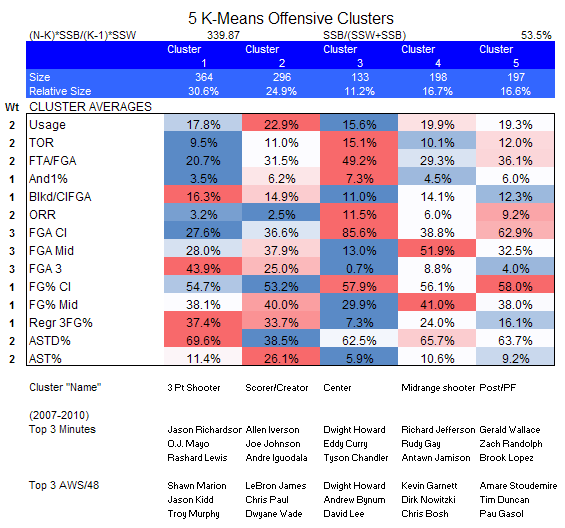 Cool, huh? I don’t know what it means, either. I never thought Jason Kidd and Troy Murphy played the same position.

What is obvious, though, is that there is a well-defined “center” position. The center has extreme values in nearly every statistical category, from AST% to shot location and FG%. And Tim Duncan and Kevin Garnett don’t play center, at least on the offensive end–but David Lee does, or should I say did. Lee was a “Center” only in 2007 but has since switched to cluster 3, “Post/PF”.

Well, to get back to the Center Comparison Chart. To simplify matters, I just used BasketballValue’s positions, so as not to get stuck in the positionality swamp. May I present 61 “Centers or Center/Power Forwards”. Three different clusters from above represented.