Well, everyone else has an All-Star post up already:

So what does ASPM say?  Well, the best measure for an All-Star game would be total overall contributed value, so I’ll look at Value over Replacement Player (VORP) to quantify who should be in.  Obviously, some positions are deeper than others–particularly in the West at PG.

Here is a colorful table of the West All-Stars (minus Yao Ming and whomever the commish picks to replace him):

Okay–the point guards are dominating in the West.  In fact, 4 of the top 6 players are PG’s.  Perhaps ASPM is biased towards PG’s a bit?  Then again, conventional wisdom on who the best players in the West are sort of lines up with the PG-heavy line of thinking.  Nash and Love are the 2 primary “snubs”, though one of them should get in to replace Yao.  Carmelo and Tim Duncan are lesser… however, the fans wanted to see Carmelo, and Duncan is Tim Duncan!  Besides, there aren’t a lot of “centers” in the West at all.  Marc Gasol is the best true 5!

On to the East, where the crop is much shallower: 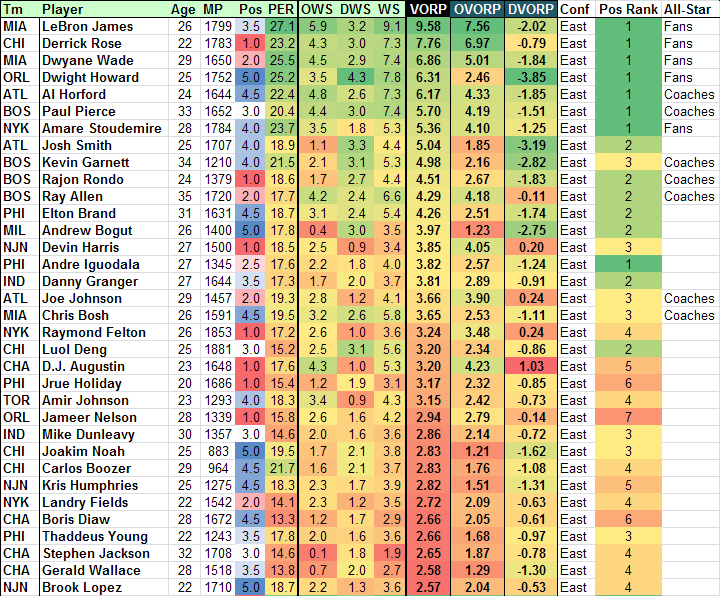 Much cleaner.  The fans made good choices, and the coaches mostly did as well.  Josh Smith should be in over his teammate Joe Johnson (again), and perhaps Brand over Bosh (hey, did anybody notice Elton Brand is having a good year?), but other than that it’s pretty clear.

The MVP debate has also been raging.  Many people are backing Rose, and the stat-geek crowd is strongly opposing that.  I don’t oppose it as strongly as most; Rose is 3rd in the league in VORP right now, with only CP3 carrying a team to a much greater extent than he has been.  Of course, CP3 is WAY ahead of Rose in this metric, so I still support CP3 for MVP….

EDIT: the data in the tables above may be found HERE.