I’m working on a new metric to quickly measure a player’s single-game contribution (a slightly more complex “game score”). I’ve tabulated the results for every game played this year, and that lets me do this: 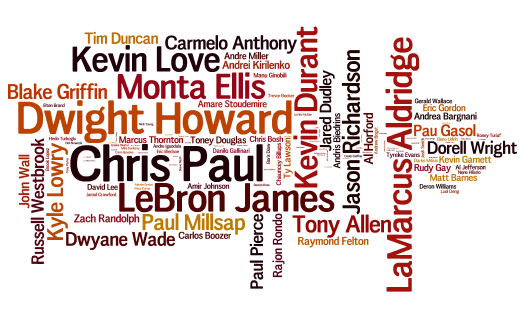 There have been 25,877 individual performances so far in this NBA season, so just making this chart is significant. Chris Paul has shown the brightest, with 4 Top 50 performances, 4 Top 100 performances (including the top 50–so none between 50 and 100) and 11 total top 250 performances.

There are 4 players who have had 3 Top 50 performances–you know them. These are players who can take over the game completely: Howard, James, Durant, and Ellis. (Yes, Ellis also has several of the worst performances this year.)

There are 10 players that were a flash-in-the-pan. Players that for one, and for only one night, played a game for the ages–and then it was over. You’ll remember them, too: Ty Lawson‘s 10-10 3’s streak. Bargnani going for 41-7-6 on the Knicks. Matt Barnes pouring in 24-7-6 in just 24 minutes without missing any shots. The other 7: Amare Stoudemire, Marcus Thornton, Rudy Gay, Toney Douglas, Carlos Boozer, Andre Miller, and Andris Biedrins. Yes, Amare only had 1 top 250 performance this year.

On the other hand, there were some workmanlike superstars, players with a bundle of top-250 performances this year: Chris Paul had his 11, Kevin Love turned in a massive 10, Howard had 9, Lebron and LaMarcus Aldridge had 8, and Monta Ellis and Zach Randolph had 7 each. No one else had more than 5 top-250 performances.