Carmelo Anthony was FINALLY traded yesterday, in a mega 3-team deal. How did the teams make out?

There are several good trade analyses around, but none of them are really focusing on the financial aspect. Kevin Pelton’s article is a good primer on the trade as a starting point, and Joe Treutlein at Hoopdata has a good analysis as well.

I’ll look at this trade from an ASPM perspective. Like always, ASPM numbers can be pulled from my spreadsheet at Google Docs. There are other metrics that have different views of Carmelo, who is one of the most difficult players to quantify in the NBA. His game is so 1-dimensional…

Well, here is what my numbers show for the players traded, along with an average career trajectory for a player of that age: 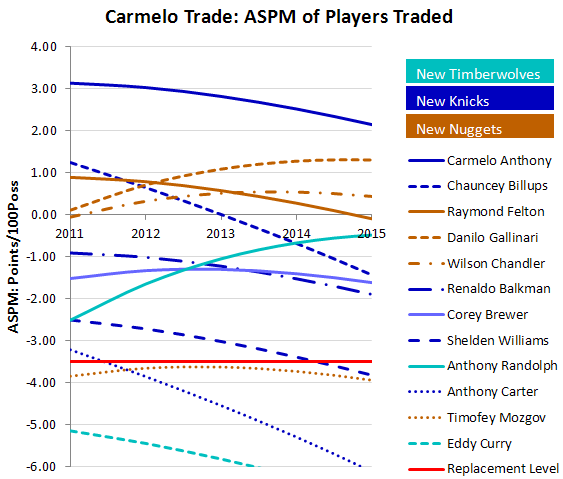 Carmelo is currently estimated as a +3.13 player, good for 20th in the NBA, similar in caliber to players like LaMarcus Aldridge, Paul Pierce, Josh Smith, and Tim Duncan. Excellent, but maybe not “Great”. Basically Kevin Durant-lite at this point, only already at his peak.

Meanwhile, the Knicks are sending 3 players that are near league average, and all of them are still young. Felton may already have peaked, but Wilson Chandler and particularly Gallo have not.

Billups is also interesting. He’s strongly on the downslide at this point. He’s a tremendous shooter, but not a very good point guard. His 5 most similar players, though:

Yeah. Not exactly Chris Paul territory, with Chauncey’s 25% assist rate. He’s an excellent offensive player by my measures (+3), but mediocre on defense (-0.3) and really bad at rebounding (-2). Coming out to about a +1 player, when everything is accounted for. And he’s 34.

Other players of note: Balkman and Brewer are decent pieces. Anthony Randolph is really, really young and mercurial. He could be something, someday.

I don’t get why Mozgov was considered an important part of this trade. What does he do?

So what are these players worth? Here is their expected value, assuming 5% inflation of salaries (who knows if that’s right!):

So, we know who the players are. What about the contracts?
Here’s a table of the players involved:

(Data from Hoopdata)
* Indicates restricted free agent
~ Indicates partially guaranteed (indications are that Billups will be kept on next year).

In addition, the Knicks gave up $3 million cash to both the Nuggets and the T-Wolves, 2 2nd round draft picks to the Nuggets (these are Golden State picks), and their 2014 1st-round pick.

If we subtract the two tables above, we get the marginal value of each player’s contract, by year (VALUES IN THOUSANDS):

So: from a financial point of view, comparing contribution to cap-space using a replacement-level-based ASPM framework, the Nuggets did quite well, “winning the trade” to the tune of about $20 million. The Knicks paid dearly, losing around $7 million in marginal contract value and spending $13 million in cash equivalents (which they don’t really care about). The T-Wolves lost a million or two, but they feel that Randolph is worth the risk (it appears). He might be, and they need risk given their current status.

I think the Knicks could have done better. The Nuggets did amazingly well, considering the hand they were dealt.