Yesterday’s Thunder-Heat game was a fun game to watch and a great game to investigate.

Oklahoma City started out with a significant advantage in this game: OKC was at home (worth 3.24 pts/100 poss) and was playing on 1 day of rest (+1.94), while Miami was playing their 3rd game in 4 days, and on the second night of a back-to-back (-1.01). Thus, OKC had a 6.19 pt advantage based on the home court and rest conditions. Of course, Miami is the best team in the league, with a +7.55 efficiency margin on average–and that includes games with players injured, most of whom were back for this game.

Before I go any further, here’s the link to the box score for this game.

To look at the impact of who was available, I took the minutes each player actually played in the game, multiplied by each player’s true talent Advanced Statistical Plus/Minus (ASPM) (calculated over the last 5 seasons), to estimate the quality of the teams on the floor. Here are the results of that analysis, and thus the pregame prediction for this game:

What do we see? Well, the Heat when at full strength are ridiculously good. They are estimated as a +13.6 team when playing this rotation of players. Of course, since this was a close game against a good team, they maximized the available players–Lebron and Wade better not play 40+ minutes every night. In addition, Spoelstra played a new lineup–he ditched Carlos Arroyo (a good idea) and played Lebron, Wade, and Miller together extensively, with Lebron at point. Kevin Arnovitz explains the change on the Miami Heat Index. Arroyo was the weakest link amongst the regular rotation. Neither he nor Chalmers could really expect to guard Westbrook.

For OKC, the absence of Thabo Sefalosha was a big deal. By ASPM, he is estimated to be the 3rd best player on the team (which would surprise most OKC fans). Harden replaced him, which doesn’t hurt. However, that meant Dequan Cook had to take Harden’s spot in the rotation. Cook is not as good as the other 2; in fact, he is projected as below replacement level. Fortunately for OKC, he turned in a very good game. Nevertheless, the absence of Thabo took OKC from a pregame slight favorite to a pregame 3 point underdog by the ASPM projection method.

On to the actual game… the game itself was broken down by Royce Young at the Daily Thunder and by the Miami Heat Index team. Let’s look at the ASPM box score. 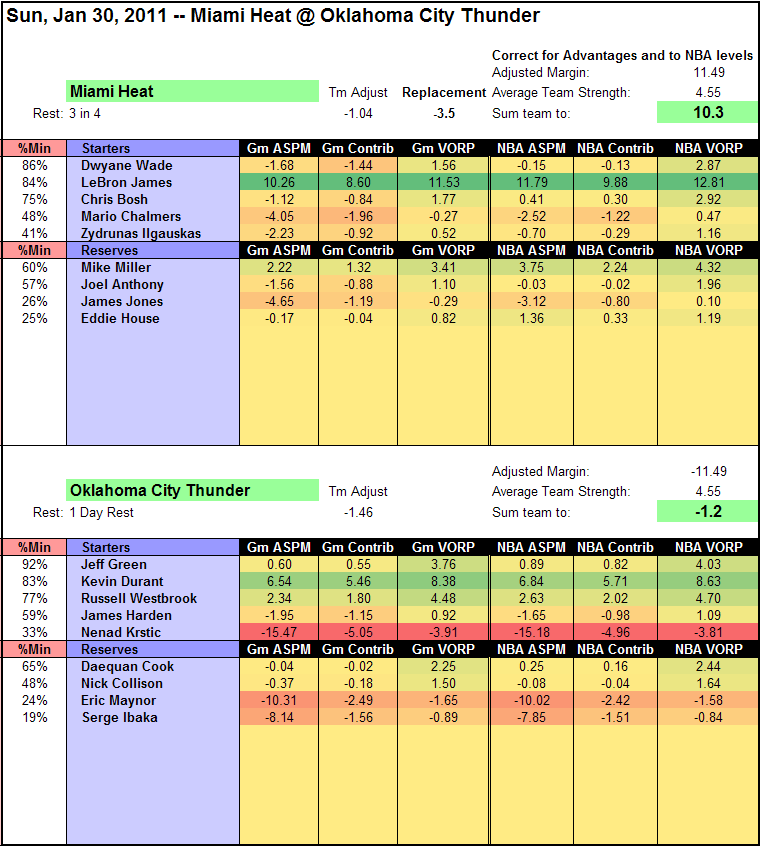 Very colorful! For Miami, everybody played decent–nobody good, nobody bad–except, of course, for Lebron’s dominant performance.

What did Lebron do? He didn’t shoot any better than Wade or Bosh (61% TS%), but he jammed the box score with big numbers otherwise. 13 assists, 4 rebounds, 4 steals, and 3 blocks, along with only 4 turnovers as the team’s primary ball-handler. That’s really, really, good. MVP good. Good enough to make a great game from Durant look rather bland by comparison.

For OKC–Krstic, Ibaka, and Maynor killed them. Krstic played 15:40, and mustered 1-3 from the field, 2 rebounds, 2 turnovers, and 2 fouls. Ouch. Ibaka played 9 minutes and threw up 0’s across the board, except for 1 block and 2 fouls. Remind me–who is Miami’s center?

And Maynor, as PG, failed to record a point on 4 shots in 12 minutes, though he did put up 3 assists and a steal.

Why was this game lost by OKC? Besides poor blocking out in the last minute? The failure of Krstic and Ibaka to do ANYTHING against the ragtag bunch of centers they were playing against.

Here is the spreadsheet used to generate this analysis.