It’s been a while since I last put together the fully adjusted NBA efficiency rankings. Here are the latest ratings (prev is 1-13-2011, the last time I updated):

If you will recall, I last time was puzzling over what exponent to use when minimizing |residuals|^n. I tried out a number of different exponents in out-of-sample tests (for example, 2/3 of games in sample, compared to 1/3 of games out of sample) and discovered a few things. First, there is a ton of random scatter as to which exponent produced the closest results in the out-of-sample test (exponents as small as 1.3 and as large as 2.5 were best, depending on how the samples were split). Secondly, the only reason to use an exponent other than 2 would be if we are certain team performances ARE skewed distributions. Third… I think team performances probably approximate a random sample from a normal distribution–thus, I am switching to minimizing squared error.

How about the same rankings as a lovely image? 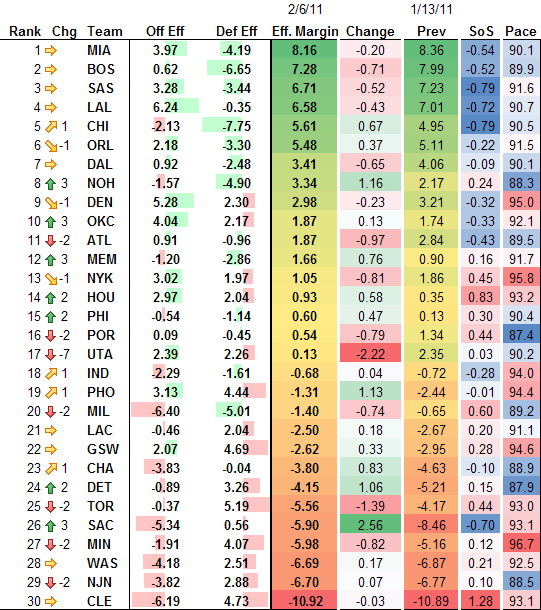 Watch how Chicago, Utah, and Cleveland have changed since that date!

The full data for this visualization is available as a Google Spreadsheet.