Last week, I unveiled the first iteration of my adjusted efficiencies Google Motion Chart. This week, I’ll revise and expand on it.

This has 2 effects: the movement is more smooth, and the most recent game has a bigger impact. Here’s the latest chart, again with all efficiencies adjusted by opponent, rest advantage, and location. No, I did not locally adjust the opponent adjustment; I feel using a full season-worth of data is more valuable than local precision.

This week’s featured team is Orlando.  Orlando has been on quite the hot streak since making the blockbuster trades.  I questioned the trades at first, but they seem to be working out famously.  I’ll probably do an in-depth analysis on the results of the trade, but first I’ll simply show how impressive this hot streak has been. 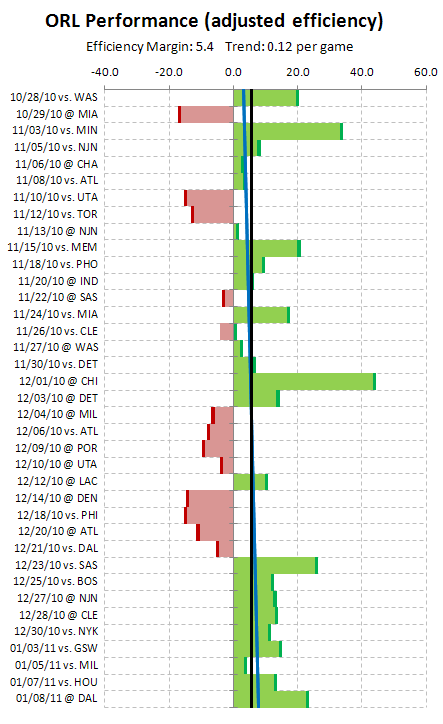 Orlando's performance through the season

That’s 9 games in a row of above-NBA-average play. Most of the improvement seems related to Hedo Turkoglu, who is a different player in Orlando. (Can a statistician say that? Should I just say “small sample size?”)

Here’s a table of Orlando’s games this season and their offensive and defensive numbers. Remember, negative is good for defense: