Okay, ready for the tournament?

I’ve put together some adjustments based on the work I teased yesterday.  The theory behind the adjustments may be found on STATS @ MTSU and Dr. Winner @ Florida.  Basically, I’m adjusting for teams that raise their game to a higher level against good foes (or vise-versa).  For instance, Long Island plays much better against good teams–probably because they got bored against the bad teams/pulled their starters.  Now, we can’t just take a simple linear regression; the slope doesn’t continue infinitely.  So I construct the Prediction Interval to estimate the mean and standard deviation at any point along the regression line, and regress based on the REGRESSED standard deviation of the team’s adjusted efficiency differentials.

For example, let’s see what Hampton looks like.  They raise their game more than just about anyone in the field; they’ve played a very easy schedule.  Here’s what their regressed curves look like: 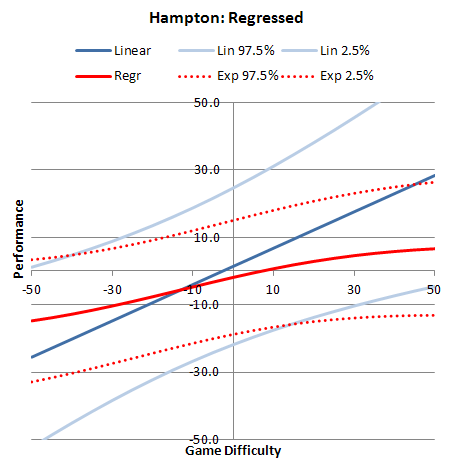 So now we’ve got a new “Tourmament Power Rating” and a standard deviation… so it’s easy to calculate odds for each game.

And here are my directly calculated odds for each team to reach each level in the tournament:

That’s a bit hard to follow, so perhaps a pretty chart would be easier: 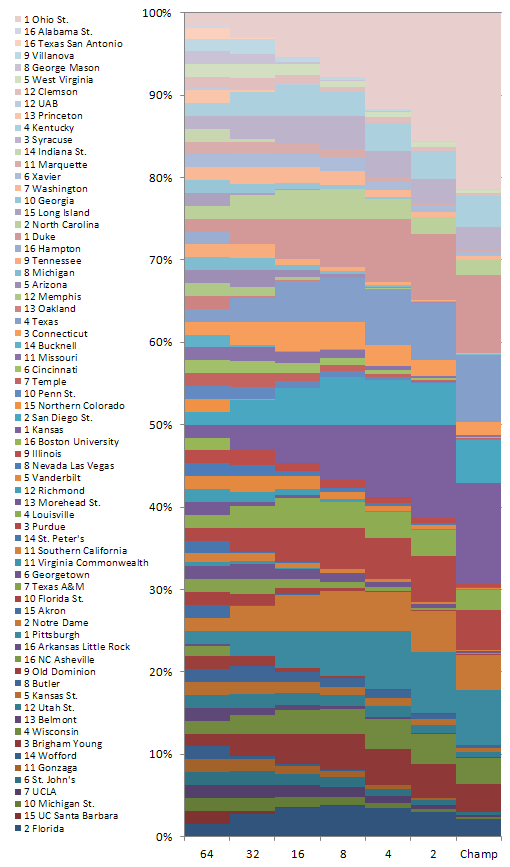 This helps us visualize which parts of the bracket are harder and which are easier.  In particular, Pitt’s bracket is really weak.  Ohio State is a solid favorite.